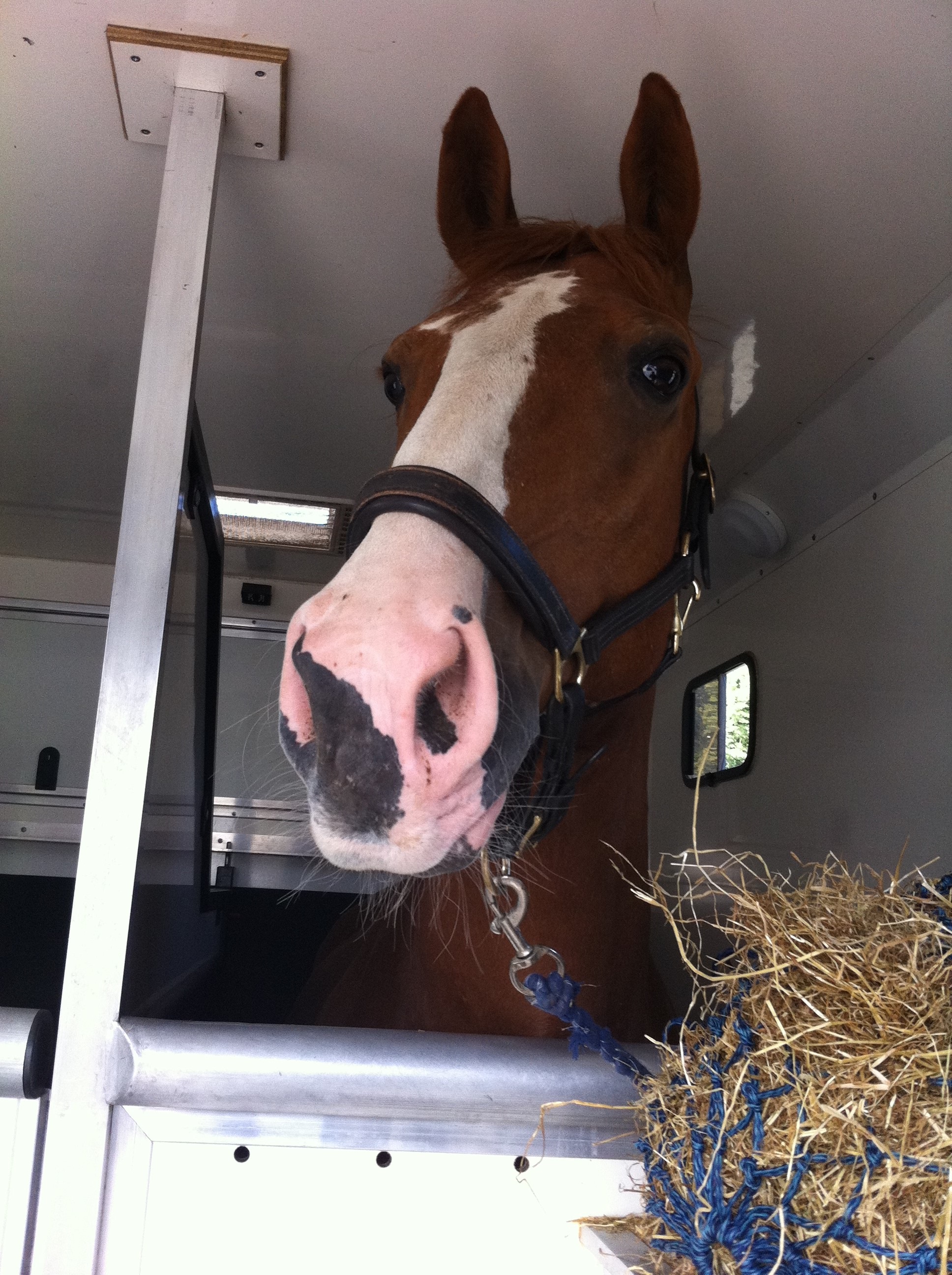 Thankfully there was not too long a gap between Hartpury and our next international at Bishop Burton during the first week of August.  Angela,  friend and former co-groom to Marion Mould with me many years ago, was persuaded out of retirement for the week to help out! We had a pretty good drive up there and passed the 240 mile journey reminiscing and testing each others memory from our days working with show jumpers! Rhapsody was his usual perfect traveller self and we arrived at lunchtime as planned.  Having never been to Bishop Burton before we quickly found our way around and Rhaps was soon rolling in his new shavings  bed. A leg stretch for Rhaps in the afternoon, a sort out in the lorry of all his Simple System feed and hay and we were all set for the next days trot up. Rhaps loves showing off at the trot up and this time was no exception - but at least he waited till after the veterinary inspection!  I had a late afternoon time for riding and 15 minutes arena familiarisation which ended up clashing with the chef dequipes meeting when there was a last minute time change. I rode as planned and Angela went to the meeting - she was getting straight back into the swing of  things!  Rhaps felt great, full of energy which was our plan and I was looking forward to the team test bright and early on Thursday morning.

I was really pleased with our test and we got  a score very close to my personal best at this level. The general feeling amongst the other riders was that judges were marking hard so this was an added boost. Best of all was that it was mistake free and forward going - just how the judges like to see him!

By contrast,  my time for Fridays championship test was 5:45! It was a very long day! But the weather was glorious and we were able to sit in the sun and watch some of the best para riders in the world warm up for their tests.  When our turn came we had another mistake free test... there was a bit more tension but a good result all the same. I was thrilled that Rhapsody's breeder and former owner Deborah Carr-Davidson made the journey to come and watch our test and I got the chance to meet her and hear some stories of the cheeky chestnut... beach rides and jumping  what he was bred for!!

It was a huge relief to ride two solid tests which gave us more valuable points for the rankings list towards Rio qualification.

With an overall result from the 2 days of 7th place... in a very competitive field with both Sophie Wells (European Champion and former Paralympic & World Champion)) and Michelle George (reining Paralympic & World Champion) with 2 horses - happily we qualified for the music freestyle on the final day. Time to have some fun with no pressure! Well that was the theory!   I was so pleased with the way that Rhaps was going and enjoying myself so much that I did go a teeny bit wrong. Suddenly I realised that I was repeating myself and needed to make a hasty change of plan to incorporate the missing compulsory movements. That is the beauty of the freestyle - so long as you know your music well you can improvise when necessary. All but one of the 5 judges didn't seem to mind the lack of symmetry and they gave a thumbs up for the music once again - although I do t think it is about time I made some changes.

Rhapsody has had a little bit of a let down through August with a bit of schooling,  lots of hacking and time in the field but will pick him back up now with training at Andrew's in early September followed by some  local British Dressage competitions. Well that is the plan. one more international qualifier this year scheduled for us at the end of October at Bury Farm. Until then - to coin a phrase from work -  its business as usual!