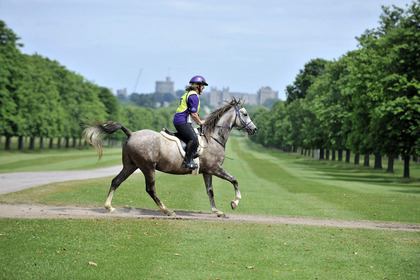 Rigel did 50km at Windsor Park on Saturday. His average ride pace was 13.4kmph. The ride is set up so that you do a 25km loop, go back to the venue and out again on the same 25km loop. I decided, therefore, that we would do a 'mock vet gate'. Rige has never experienced a vet gate and I had no idea how he'd cope with me getting back on and asking me to do it all over again. Suffice it to say that he cantered out of the start again! What a trooper!

He did his first loop at 12.6kmph and the second loop at 14.3kmph! Not bad for a beginner! I'm so delighted with him.

What's even better is that he ate an entire bucket of (soaked, obviously!) red bag grass pellets in the vet gate. I'm sure that's what powered him around the second loop. It's so good having a horse who actively seeks out food rather than, like Ellie, having to be enticed to eat.

News from the Convention is that Ellie might be leading out the horses in the endurance parade as she is currently the only horse on a GB Squad. She's going to be all togged up in red, white and blue and I shall be wearing my squad kit....and trying not to cry with pride!