Georgie Wood Blog 9: It's all starting to come together!

Blog 9: It's all starting to come together! 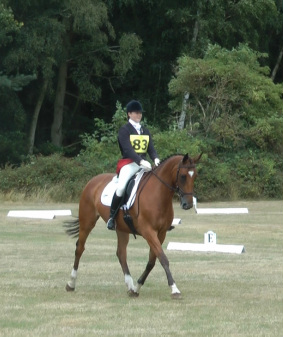 After Barbury we backed off everything for a bit as the ground had started to get hard and both the horses had done quite a lot! The plan was to head to Dauntsey and then Wilton with Lily, but being inexperienced and quite a big horse we withdrew her from both events fearing the ground may be too firm and the petrol we would spend on the way there wasn't worth it. I heard the organisers worked very hard at both venues so it was a shame we couldn't run but in terms of Lilys confidence it was definitely the right decision.
Last week we headed to the Royal International at Hickstead to jump for the first time ever! The plan was to go with Lily, Punch and Coco on the Tuesday and Thursday. With Lily in two 1.10m classes each day, Coco in a 1.10m and the Foxhunter each day and Punch in the 1.00m open each day. However as always plans are there to change! The Tuesday we got there and the weather was revolting! It was cold and pouring with rain and my class started at 7.30 - maybe I should have taken it as a sign! However one day I may be at Badminton in the pouring rain and I would just have to get on with it!! Lily was first off and it wasn't the best of starts. She went in and turned very green and wobbley. She had the first two fences down which is completely unlike her. She popped the double at three, but then slipped through the oxer at 4 and despite coming round with all intentions of jumping it the second time she clearly didn't feel safe on her feet and stopped again! Post round analysis was that the relatively firm ground had then turned slippery (very similar circumstances to Nunney) and she didn't trust her footing. So a pleading call to the farrier was made to reshoe her with 2 stud holes in each foot! We withdrew her from the second class that day as she wasn't being naughty she was unsure! Coco was next to go and with me a little nervous after Lilys round he was fab and carried me round. I wasn't riding positively enough down the distances, and if you have ridden at Hickstead you will know the distances really need attacking! We had 2 rails down for 8 faults but in the circumstances it was fine! We withdrew him from the foxhunter, as we didn't need a scare and had another chance later in the week! With just Punch left to go, the pressure was on! The 1.00m class was very big considering, but he was fab and flew round for a double clear, despite me completely missing my shot into the double, but he tried his very hardest and somehow managed to jump it clear! It was good enough for 16th place out of 130, not bad for his first jumping outing and only his 2nd outing since Badminton Grassroots!
We headed back on Thursday but this time without Punch as he was so good there was no point pushing him round again! Lily took his place on the 1 meter on the surface to check she hadn't lost her confidence. She jumped a lovely round, which would have been double clear if the jockey had steered to the right fence in the jump off. I realised at the last minute and tried to turn her to the right fence but she told me that was a stupid idea and next time to give her a chance to actually see it, luckily it didn't seem to bother her too much! Thursday was the opposite of Tuesday - it was burning hot and the hottest day of the year recorded at Heathrow! Coco jumped a good round in the 1.10 for 1 fence down, I just rather dived at it so he tipped the front rail. In the Fox he jumped really well. I had the same problem as in the 1.10m at fence 3, where he tipped the front rail, but then jumped really well till the 2nd last where we ended up too close to the upright out of a related distance. 8 faults doesn't really sum up the round.


We had to quickly take Lily to school on grass to make sure the new studding system worked and to reassure her that she was capable of jumping on grass. We popped down to Felbridge which worked really well and was just what we both needed. A quick cross country school at Littleton followed as she hadn't been cross country in nearly 2 months! It was perfect as we practiced the water and ditches and some skinnies, which is all she needed but theres jumps to cover it all which is great - especially so local!

On Monday we headed to Smiths Lawn for the Novice with Lily, we had wanted to swap to the BE100 but there was no space so we thought we would go and see. It looked very reasonable so we decided to give it a go! Her dressage was great, and I am starting to get the basis of what will be a very special test - its just a case of perfecting the lateral work and also improving her attention as unfortunately a bike with stabilisers came along the road behind the arena which was very scary! Once I have got her attention she will be pretty unbeatable in the dressage I think! However the mistakes left us on a score of 33, which was still 9th after the dressage. The show jumping was what I was slightly nervous about after her little blip but I needn't have been as she jumped a great and confident round. Sadly she wasn't concentrating from the beginning and added 4 faults at the first fence before jumping a fab clear - always the way! But it was fine as she felt happy and confident! The cross country was educational, nothing to testing but a bit of everything. It was just what she needed and she ate it up making it feel so easy. She is so straight and looks for the flags to jump between which is a great feeling! We added 0.4 time faults to our score and this was good enough for 4th place! So she has picked up her first 3 BE points which is very exciting. Smiths Lawn was a really lovely, well organised and friendly event. They took on that the dressage and show jumping warm ups were a little small and are going to do something about it for next year. If you get a chance to go, do as it was a really lovely day and the ground was spot on.

Lastly (and I know its become an essay - really sorry!) today we headed off to Pyecombe for some BSJA. We jumped Lily in the Newcomers and she jumped an awesome round. She was double clear until the last fence in the jump off where she just rubbed it having got a little bit flat and long in my attempts to be super speedy! She did some fab turns though and feels on great form - definitely ready to move up to Foxhunter soon! Coco was insulted by the fact he was jumping the 1.10 so had the two smallest uprights on the course down, however I feel I was just being a bit too relaxed with my hand, especially now he's much stronger, so he was just jumping a bit flat. In the Foxhunter he was much better as I was really jumping him into my hand so that he had a contact to secure himself on. Again he had one of the smallest uprights on the course down, but it was a lot better and he is still changing so I need to keep updating my riding to suit how he is going.

This week Lily and I have got a cross country lesson with Blyth Tait that we won at the JAS final which is exciting. I have also got an A test training day in preparation for my A test in September! As well as this I have got a Pony Club lesson with Caroline Jeanne on Friday and Jumping lessons with Ernest on Saturday! So no peace for the wicked!!