Blog 10: University is closing in! 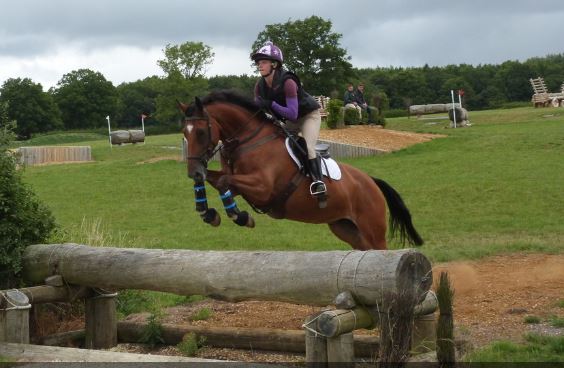 It has been another busy few weeks, as not only am I trying to ride all the horses but university is getting closer and closer, I have realised that I really can't ignore the fact I am off to uni any longer and that I must start doing something about it, so reluctantly I have!
We haven't been competing that much over the last month but I have been having lots of lessons and training hard, using the remaining weeks of my gap year to full advantage! The last blog I wrote I had a manic week of training which was fantastic. Firstly was the Blyth Tait clinic at Lyneham Heath Equestrian Centre. It was a superb facility and perfect for the cross country lesson we had. They had every type of fence you could imagine which was great for Lily and she was awesome! She jumped into water for the first time and both She and I did our first bounce into water which she thought was great fun.

The next day we were off to Moreton Morrell in Warwickshire for a Pony Club A Test training day! I have found the two training days that I have done very enjoyable and informative. The pointers that they gave me to improve this time were different to what they told me last time and much smaller issues too which is great as I feel I am moving in the right direction and that I am in with a chance of passing the test in a couple of weeks time! There was a very broad selection of horses and I definitely found some of them easier than others. Even if after all the training I don't pass the test this year I feel that I have gained a lot through training for it and I will be even more ready to give it a go next year!

The pony club Caroline Jeanne lessons were great and Lily was fab. We did a bit of simulated 'arena XC' which Lily thought was great fun! Caroline got our group jumping through a grid with our eyes shut which was really interesting as we had to shut our eyes as soon as we were straight and then just sit still! Not a single one of us hit an iffy spot when we had our eyes shut, and as soon as we were allowed to see again we all started to try and adjust unnecessarily on the way in, instead of just keeping a good quality canter which was very interesting. I think all of us really benefited! Although I didn't have a lesson with Caroline on Coco, we still did a bit of arena cross country with him and he was mega!

Then on the Saturday we headed over to use the fab arena at LMEQ for a jumping lesson on both horses with Ernest! We were really working on getting collection of the canter but with a very light contact, so I wasn't strangling them to get it but they were balanced and sitting on their hind legs, which was really interesting and worked very well. Both horses jumped relatively few fences, but I think that was a good thing as it showed that we were getting it right and so didn't need to keep jumping!

Lastly we headed to Wellington OIU21 last weekend with Coco, just to give him a run before Gatcombe in a few weeks as he hadn't run since Barbury! He did a really good test with some very nice work, however the judge didn't agree which was a shame and he got a 37.3. However I was pleased with how he went which was the main thing. I was trying some new tactics as such in the showjumping, including turning up a bit shorter to my fences. I think in the atmosphere he was just slightly lacking attention, and although the canter I had looked quite good I think it lacked the bit of buzz that he likes to jump from which was a shame as it resulted in three fences down, two of which were the first two where I think I was just a bit to relaxed. Into the third fence I created a bit more power into the canter and that seemed to help. However he more than made up for it cross country after a slightly rusty start (he hadn't been cross country in 7 weeks!) he was awesome and just popped round making it feel really easy. Including a combination at fence 9 which I was really worried about, a flower bed on a long curving 4 strides to a double of big corners on a long two strides! But he just locked on a flew which was a great feeling and I think it has really helped me to put the little blip at Nunney behind us!

We are jumping at Hickstead this week so fingers crossed, our next event is Gatcombe CIC2* in late September to try and qualify for Weston so hopefully that will all work out!