Blog 12: Nothing ever runs smoothly 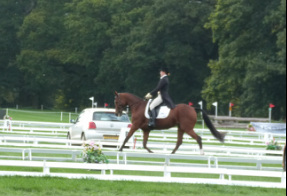 I should have learnt by now that with horses, nothing ever goes quite as planned. I went to Weston feeling quietly confident that we could finish up with a decent placing (that will teach me!) As I had done a last minute swap, I was 3rd last to go in my section, which meant late Friday dressage. On the Wednesday I trotted up Coco and also Lucyanna Westaway's Tiggr (Raindance III) who both flew through without trouble. On the Thursday Charli White and her horse Sienna were doing their dressage so we made sure we went and supported her as we have been in Pony Club teams together since the beginning. We had a lovely set up at Weston as Charli, Lucy and I had our lorries parked next to each other and we all ate together which made it extremely sociable!
Friday was dressage day and in hindsight I should have worked him on the Friday morning as he was too fresh when it came to the test. He warmed up amazingly but once he got in there he went a bit tense, and when he goes tense you need to be Charlotte Dujardin to sit to his trot (well not quite but I can no longer sit on it!) I then get a bit tight through my leg and as a result give him unclear aids which was a shame as a lot of mistakes crept in leaving us on a score of 64. However I had the cross country to go out and enjoy the next day and that is exactly what I did.

Unfortunately the course was very straightforwards and the time was really easy to make, which led to a pretty uneventful day. However Coco switched on cruise control and jumped round faultlessly! I had one worrying moment when my stopwatch went for minute 7 and I was 250 metres behind my marker, until I checked my watch and it was 6 minutes that had just gone and as a result I was 45 seconds up on the clock! I never pushed him, but because the course was way within his comfort zone I never had to set up and really ride anything, just jumped out of a rhythm. However he has again confirmed what an amazing cross country horse he is. We really upped his feed in the lead up to Weston, still on Simple System, but just a lot more of the high energy feeds such as Red Bag Grass Pellets. We have also found TopNosh to be amazing for keeping condition and Coco doesn't hold condition that easily, yet the day after cross country at Weston, you wouldn't have really known he had run, a credit to the system as a whole.
Sunday morning is always a worry, but he came out looking great so thought the trot up would run smoothly and I could get on with the show jumping (another big mistake!) We got up to the trot up and the rain was driving in, and no one was organising it  resulting in total carnage. Eventually our turn came and he trotted away really well but as I turned to come back the rain was in his face and he didn't really trot. I was then asked to trot again at which point I panicked slightly as he was still reluctant and this only made a bad situation worse. We were sent to the holding box and the vet poked and poked until he thought he had found something and pretty much told the ground jury to fail us. We trotted again and he trotted fine but fail us they did and that was that.
When we got home we trotted him on a circle on the hard and he was totally sound, there has been no soreness or swelling, so frustrating but the main thing is that the horse is in one piece. Moral to the story is never take the trot up for granted as once you have been held you are doomed to fail! Therefore every time it is raining this winter I am going to practice trotting up and then I am never going to have the same problem again.

Now both horses have had a short rest and are back in work. Lily will get too fat if left any longer and Coco is the type of horse that is better off working - otherwise he will just find a way to injure himself in his boredom!
Going forwards it will be dressage, dressage and more dressage. One of my aims next season is to consistently produce tests which are worthy of a sub 30s mark, so regardless of what the mark actually is, I want the work in the test to be deserving of 7s the whole way through. Show jumping is going to play a big part too as I would love to do an Advanced Intermediate next season with Coco and step Lily up to Intermediate Novice. I want to get Lilys newcomers double clears in to jump her in 2nd rounds next year too.
Winter Goals as follows;

So not much to work on really. I am lucky enough to be receiving a sports bursary from my uni for riding, being awarded £400 over the next year which I am planning on using for training purposes to allow me to achieve my goals and come out ready to win next season!