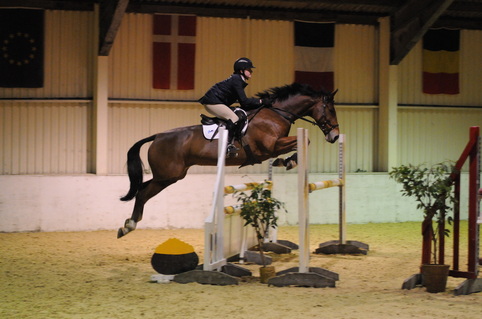 Although it has not been too busy on the competition front, I seem to have found very little time to write a blog update for what seems like forever! However the horses are on great form and it is now all systems go ready for the 2014 event season!

Our first outing back after Weston was the start of November when we took Lily to Royal Leisure to jump in the 1.10m (see picture) She was a little ring rusty and spooky having not jumped indoors since the JAS finals in February, so resulted in a couple of rolled poles but she felt great and jumped really well.

I then had the excitement of my first university riding competition on the 21st of November, and it couldn't really have been a better start. It was Royal Holloway's home competition so the pressure was on really, as we were capable of putting in a very respectable team performance. The university riding system is relatively complicated. You compete in a pool with three other local universities and each of you host one competition. When you are competing, there are 4 dressage horses and 4 jumping horses with one person from each university riding a dressage horse in the morning, and then the same for the jumping horses in the afternoon (so yes the poor horses have to either do 4 dressage tests or 4 jumping rounds back to back which is quite a big ask!) You pick a letter out of a hat which corresponds with the horse you ride. If you win on your horse you get given a score of 0. Then if you are 2nd, 3rd or 4th on your horse you get given penalties corresponding to the number of points you are behind the winner on your horse! So I won the dressage on my horse by more than 20 marks, and ended with the best dressage score of everyone in the competition. We then show jumped in the afternoon (see picture below) which I jumped a clear round and again got the best mark on my horse so finished on 0 overall. This left me in equal first as someone else had won on both of their horses as well, however it comes down to the highest dressage score, so I won overall which was very exciting! The team also won by a large margin, so it really couldn't have started any better!

At this point I seemed to hit a bit of a purple patch as on the 26th of November we headed to Royal Leisure for some BS and Lily was awesome, resulting in a fab double clear and a win in the Newcomers. She felt fab so we got brave and put her in the Foxhunter. She was then a bit tired which resulted in a couple of poles, but I was delighted with her as she kept jumping and kept trying so couldn't have asked any more. Coco went in and had the first two fences down, before remembering that he did know how to show jump and jumping a lovely clear round!!

The next outing was to Merrist Wood unaffiliated dressage, on the 1st of December. Lily did two Novice tests, and went really well achieving 68% and 66% finished a respectable 3rd and 6th. Coco was Mr Superstar, doing two elementary's for 69% and 67% to finish 1st and 2nd, and not bad considering I did them both in my close contact jump saddle!

On the 10th of December we went to Addington to show jump. Lily proved that she can still be a cheeky madam if you are not on the ball and had a couple of stops in the Newcomers, so I took her back in and she stopped at the first, I then reiterated that actually we were going to jump all the fences on the first attempt and once she hit the 1.20m jump off (it was single phase) she was foot perfect and just popped round! We took Coco into the 1.15m and he felt unbelievable! He jumped one of the best rounds I think I have ever felt him do, and was unlucky to roll the 2nd last when I got a bit excited and slightly fired him into it, which was a shame as he would have been placed otherwise!

The 11th December was time for my next university riding competition, this time hosted by UCL. We had a fairly prompt start to make the trek to north London, and it wasn't a simple journey due to the thick fog! Luckily we competed in the indoor school all day so it didn't matter that the fog didn't clear all day! I had a lovely chestnut horse for the dressage who did a lovely test for me and tried his heart out, resulting in a win for me on my horse and 0 penalties. Jumping I had a grey mare who I think was a bit shaken from having so many different riders on one after the other. She jumped really well but ended up knocking the 2nd last which was a shame, however my round on her was still good enough to win, so finished on another 0 score. Unfortunately someone else also finished on a 0 score and their dressage mark was higher this time so I finished second. The team struggled a little more on the day and luck just didn't seem to be with us and we were beaten into 3rd by just 2 penalties!

We had a lovely relaxing Christmas and it has been lovely to catch up with lots of friends and have a slightly quieter time before we start stepping up the work ready for the start of the season. I have been and explored the lights at Oxford St, visited Selfridges and been ice skating in London (although I definitely am more at home in the country!) and also made the annual trip up to Olympia which was as good as ever and had a really lovely evening with 2 fantastic jumping classes. Although I have to say I felt the displays were slightly lacking this year compared to other years! It was still Olympia and of course it is not Christmas until we have been up there!

Last Thursday we headed to Felbridge combined training, Lily made a few mistakes in her test which was a shame, as she is showing signs of real ability in this phase gaining four 8s! She got a score of 34.8 and was the only one to finish on her dressage in the Novice CT which left us in 2nd! Coco did a really lovely test and scored 32.9 which I was thrilled with as that is our highest score yet in an intermediate level test. Unfortunately he rolled 3 poles in the show jumping but mum aka chiropractor extraordinaire checked him when we got home and he was a bit sore which explained the fences down. The video of Coco's dressage can be seen at the bottom of the report.

In other exciting news, the week before Christmas, I undertook a weeks training and then took, and passed my HGV test so I can now drive the horsebox (subject to one extra training day I have to take due to not being 21!)

I had the most fantastic 2013 and I feel at this point a huge thank you must go out to Simple System Feeds for playing a vital part in helping me keep the horses looking and feeling incredible all year, their feeds really do make a difference and I am so glad we have found such an effective feed system that suits every single horse on the yard from the skinny 30 year old pony who suffers with cushings, a horse with EMS, and a 2* event horse with all sorts in between - it is truly fantastic. Also thanks to Mum for all her hard work, keeping the horses in one piece and generally putting up with me. Along with everyone who has helped me this year, too many to mention! I feel very privileged to have two such lovely talented horses to campaign in 2014 - Bring it on!!