Georgie Wood Blog 15: It was worth the wait! 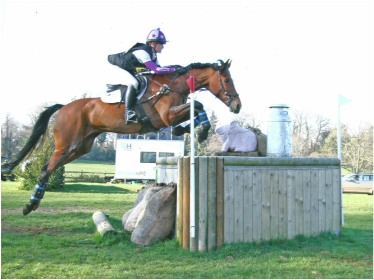 I will head back to where I left off, and I was heading off to the JAS final. Coco, wasn't quite fit enough to go having had some time off, so it was down to Lily in the Novice and the Open. Unfortunately, she was not right, and got eliminated in the Novice, so we took her home, as she loves the JAS series and it really wasn't like her. We noticed that her saddle didn't fit so have had that sorted out. However she is still not 100% comfortable, not lame, just not happy. So she is off to the vets for some investigations. Fingers crossed it is nothing too serious and can be fixed.

Meanwhile, Aldon was creeping up on us and I started to realise I couldn't remember the last time I had done a dressage test or been out show jumping on Coco - and the last time we had been cross country was Weston last October. So we had a busy week, where we headed off to Felbridge BSJA on Thursday 6th of March, where I just jumped him in the Newcomers - he was awesome and jumped a fab double clear. I have been struggling with his show jumping this winter (I couldn't seem to get in a rhythm) but the round felt really good so I was so pleased with him.
On the Friday we headed to Littleton Manor for some cross country schooling - they had worked hard during the week and a dry spell and having got the roller on the field and sand on the take offs and landings the ground was fantastic. Coco was going brilliantly until he misjudged the back of a ditch and unceremoniously deposited me out the side door, then proceeded to escape, gallop up the gallops and to the front gate.. And I had to go and retrieve him! However I got back on and he carried on as if nothing had happened, so I was confident we were ready to go!
On the Saturday, I was at Surbiton playing hockey at 10 am, and I had dressage at Oldencraig at 12.50. So mum (and super groom Katie) got Coco all ready and met me there. I ran off the hockey pitch, (throwing a bit of a strop as we lost and shouldn't have done!) jumped in my car, and drove to Oldencraig in time to get on and warm up. We did two elementary tests and he got 67% and 64% for 2nd and 3rd, but it was no where near as good as he is capable of producing so some exciting scores to come I feel!
Sunday I had a jumping lesson with Ernest at Littleton. Awesome, fantastic, brilliant, perfect - Coco was all of these and more. I always forget how fab my lessons with Ernest are. Coco did not touch a pole and I felt full of confidence that we could head to Aldon and be more than capable of jumping a clear.


A quiet week leading up to Aldon, making sure we kept Coco in one piece and were as prepared as possible! Sunday we had a very civilised dressage of 12.25, and a gap between dressage and show jumping to walk the course. We got there in plenty of time and so got tacked up and headed down to the dressage. He warmed up really well and felt very relaxed and soft, so I didn't over work him as he tends to get more tense as he gets tired. I picked him up again once the horse in front of me went in and he was definitely more uptight than he had been, but settled nicely in time for us to go in. Generally he performed a very pleasant test, I didn't go for it as it was his first test on grass since Weston. I was thrilled with the canter work as he is really able to sit behind now and got 7s for my simple change and my canter walk, which is a big improvement. A bit of tension crept in at the end resulting in cantering our medium trot which was a shame, and left us on a score of 37.3, which was respectable in the section.
We walked the course, which asked plenty of questions for our first run, but I knew we were more than capable I just had to give him a chance to assess what the question was and give him the best chance of jumping it! The show jumping had been causing plenty of problems with some distances being built short and others long, this is where my training with Ernest really shows as we practice over distances like that so I am prepared and Coco is able to respond to my aids. He jumped brilliantly, and was unlucky to just roll the in of a big double of uprights, but I was thrilled with him as all the tricky distances we had completely nailed! There were only 5 clears in my section too so not a bad effort at all!
Then it was cross country time - there was a bit of a queue at the start, but the collecting ring stewards were fantastic and kept it all moving, although we only waited 25 - 30 minutes they apologised for the wait. Another reason why I love Aldon as all the volunteers are fantastic! Soon it was time to go and he switched on cruise control and off he went. He is such an amazing and genuine cross country horse and just ate up the course, never hesitating at any of the questions, I seriously think anyone could have got on and he would have jumped clear round there - he is so cool! I didn't push for time so ended up with 7.6 time faults which was still good enough for 7th place, which I was thrilled with, as the company I was in was strong and I never dreamt I would get placed!!
Next event is to South of England OIu21 and then Burnham Market CIC2* so fingers crossed. We have also got another Ernest lesson, some dressage and show jumping shows planned between now and then with the hope of being able to qualify for and put in a good performance at Houghton CCI2*