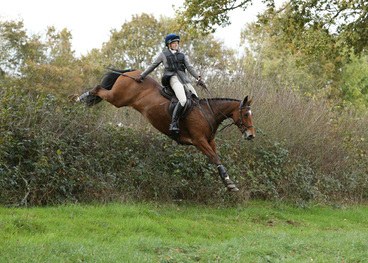 The will to succeed is important, but what's more important is the will to prepare...

So it may be the off season, but the preparations I do now are what is going to help me reach my goals next season. Lily is feeling the best she ever has done and I am so excited for next year already. I have a feeling it will be a good one.
I know I haven't written for a while but Lily had a few quiet weeks after our last event and we have only been out competing twice so I haven't had a lot to write about. As you can see in the picture, we have managed to get Lily out hunting. I felt that she lacks a bit of self belief cross country and that hunting may give her that confidence that she lacks, she is so talented and it would be a shame not to try.
She has been impeccably behaved every time out and absolutely loves it! She thinks it is the most amazing fun to gallop across fields and over fences and is taking the fences on more and more. We have been out with the Kent and Surrey Bloodhounds twice, once on Hound Exercise and then to the opening meet where we got to jump a few hedges, and she was super brave and jumped like a stag! We have also been out once with the Staff College and Sandhurst and again she was great. Since being out hunting she has been a different horse in the school. She is enthusiastic about her work and I am able to start working on more than just getting her going forwards, her medium trot is coming on and I am so excited, it feels like all the hours I have put in are paying off.

I took her out to Merrist Wood showjumping a couple of weeks ago, and despite there being 250 entries in the first two classes (I was entered in classes 3 & 4) they were clearly extremely efficient and I had got there at 3.30, jumped to classes and left by 6! First was the 1.05m, she jumped incredibly considering we hadn't been out anywhere for over a month and a half, she was confident and cruised round for a double clear. We then jumped in the Newcomers, it started really well, but I slightly lost my rhythm towards the end and then she had a cheeky stop at the last fence in the first round where she was spooking at the arena party sitting just beyond the fence, however I wasn't disappointed as she felt really good.
Today we headed out to Parwood for another BSJA show and again were jumping in the 1.05 and the Newcomers. Awesome is the only word I can use to describe her round in the 1.05m. She found it so so easy and is jumping the best she ever has done. After an easy clear where I didn't push her too fast as I still want to build her confidence, she finished 6th of 35 which was a great result. The Newcomers was a decent track but I needn't have worried as she took it on and reminded me why she is as special as she is. Again she made it feel small, we hit a lovely rhythm and maintained it round the whole course. Unfortunately she just rubbed the in of the double at fence 8 as it was the second part of a related distance with the low sun shining straight at us, I think as she suddenly saw the second part of the double, she slightly hollowed and rubbed the front rail of the oxer behind. That is the least of my worries because she was happy and confident and gave me the feeling that if the fences had gone up two or even four holes she still would have just been able to pop round!

She is still currently out over night doing her best field pony impression. She absolutely loves it so will try and keep her in that routine as long as the weather allows. Meanwhile we have increased her feed as the grass quality is starting to drop off and with her hunting as well she is looking very fit and we want to maintain her condition. She is being fed soaked Lucie Pellets and GreenGold as well as Traditional Brewers Yeast and the new Flexi Balance alongside her Instant Linseed to keep her tummy happy.

Coco is doing well and has done one month of walking so far so is currently walking for 45 minutes a day. We are planning to do another month of walking to get him up to an hour a day before starting to introduce some trotting. He is very happy and is looking well. He has put on a lot of topline since he has been back walking and I still have my fingers firmly crossed that he will come back to event again next season as he just loves his work.