Georgie Wood Blog 24: I am getting more excited by the day!

Blog 24: I am getting more excited by the day! 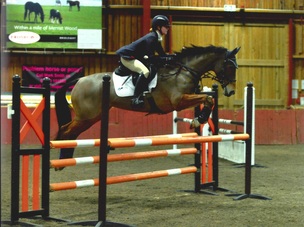 It has been so busy the last couple of weeks, I thought I had better do a mid January blog to prevent the next one being a dissertation length essay!!
I came across this quote and thought it was fantastic: Enthusiasm is excitement with inspiration, motivation and a pinch of creativity. It summarises my excitement for the season so well!

So last weekend we headed to Littleton Manor on the Saturday for their first British Eventing Fixture, the Arena Eventing. It was a fabulous event, the course was great as there were turns to make you take risks if you wanted to win, and slower lines if you were going for a confident giving round. It was great to see local XC starter Chris Kirby on the collecting ring and it ran so smoothly so thank you everyone! Lily was awesome - she found it so easy and flew round. We weren't quite quick enough to catch the leaders but was good enough to finish 3rd in a very competitive class.

On the Sunday we went to Merrist Wood show jumping (starting off our 2015 event preparation to be as ready as we can!!). We had entered the 1.05m (picture above) and the Blue Chip 1.10m Qualifier. In the 1.05 she was awesome, jumping probably one of the best rounds we have ever jumped. It was smooth and we met everything spot on, I kept moving forwards but didn't go mad which was good enough for 7th out of 65 odd entries! In the 1.10m she reminded me she can be a cheeky little monkey at times, had jumped a great round until the last fence of the first phase (a tiny little upright) where she had been spooking at the arena party and I wasn't quick enough to get her straight so she stopped and I very nearly went over her head! Luckily I stayed on and she turned round and popped it nicely!

After a quiet week, the plan was to head to Bury Farm JAS yesterday. I had had a bit of a sore throat all week and it had been getting worse, but I didn't take much notice until Friday morning when my neck and face had swollen up with my glands! Mum booked me an appointment at the Doctors, so I quickly hacked Coco and rushed to the Doctors in my jodhs and mucky boots (I am sure they appreciated that too!) Anyway I was diagnosed with really bad tonsillitis, which explained the pain! But it was ok, I was given a prescription for antibiotics and I headed back to the yard to jump Lily - I was not missing out on the first JAS of the year!! Dosed up on antibiotics and painkillers I headed to Bury Farm and it was definitely worth it! Lily is back on the form of her life and just pinging! She jumped a fab round in the 100, just having one down, and recieved a style mark of 12 however she was HC so we weren't placed. In the Novice she was even better, another smooth round left us as one of only 2 inside the very tight optimum time! She got a style mark of 10 but unfortunately we rolled the last which left us in 2nd place - otherwise we would have won!
So far a good start to 2015, she has been placed every time out! Long may it continue!

No competing next weekend, although we do have a lesson booked on Sunday, and then the plan is some dressage and hunting the following weekend!