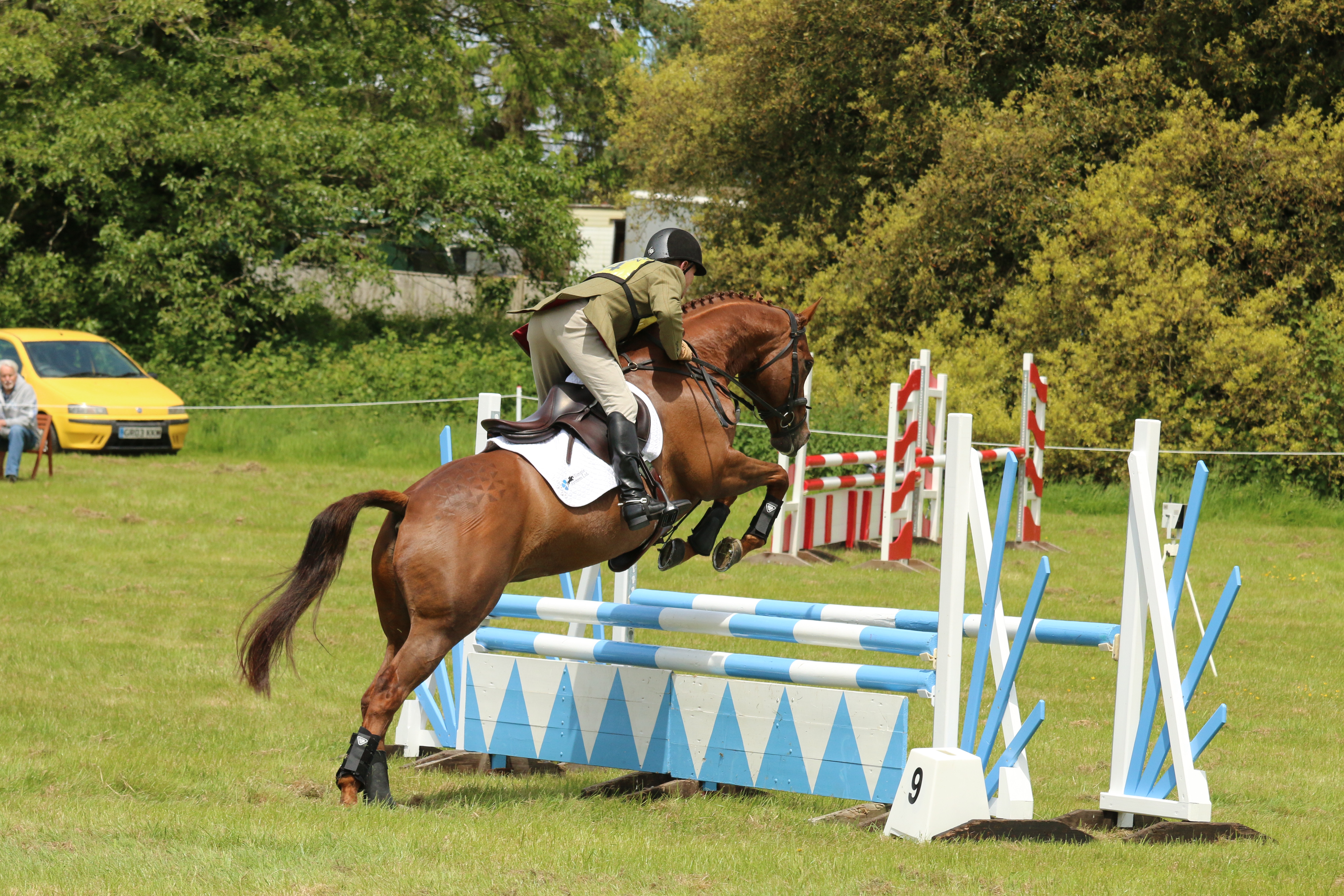 So just when the diary is full of plans and everything seems to be going well lifes banana skin just cant resist interfering! Tinka was going great guns at Keysoe; a clear SJ and was jumping well on the XC when she misjudged a straight forward fence on the way home, banked it and couldnt get her legs out in time. She had little option but to use her head as landing gear. Ouch! Fortunately neither of them were seriously hurt. Tinka has been back at her owners stud for a few weeks where she has had a vet check-up, physio and acupuncture. They are still concerned about her neck and poll so she wont be back with us any time soon meaning that there will be no one star, NRF or Corinthian Cup at Gatcombe this year. This game can be so very disappointing.

After that we disappeared to Norfolk briefly for a few days with the dogs. When we got back the 17hh Maabof was waiting for me in Lexis stable for a week of learning to jump boot-camp. He most certainly can jump, he showed great natural technique over a fence on the lunge and was a star under saddle. He has not really seen any jumps before and trotted around a little 70cm course with water tray, plank and filler first time without even blinking. How cool is he?!

We have had SJ clinics at Eaglesfield and at Carmen Court, plus an all day clinic at Coombelands with SJ on their surface in the morning and XC schooling in the afternoon. I love it there; such amazing facilities and spectacular views over the downs. We have also schooled a few groups at Bonfleur and Lodge Farm. It is always a very busy time of year but we love it that way.

The naughty black pony has been hacking for the last month, mostly because we need to get over ourself and we meet quite a lot of things we dont like out hacking, but also I decided that she is still so immature both mentally and physically I would back off a bit and give her some time. We had already entered the riding club ODE at Coombelands, and decided we would still go as a benchmark for where we are after a month of hacking. I must say she did try a lot harder. She was 5th after the dressage (it still felt like wheeling a shopping trolley round an ice rink but she did try and there was no nonsense about the judges car, hurrah!). The SJ was better. Make no mistake it was messy but we got to the finish and it was hugely improved on Munstead. Then at the XC we had the usual napping to go into the start-box, leave the start-box and get to the first fence but really a token effort compared to some of our epic hacking moments. Most importantly once we got over the first fence a switch clicked in her brain and she was off, taking me.....woo hooo!!! A clear round no less! So yes its all very much a work in progress but also a much better effort so I have temporarily stopped calling her the Black Brat.....well, until the next time we find ourselves on two legs in the middle of a field.....

Lily has been star of the month with a trip to Borde Hill for the BE90. She posted her best dressage to date and a double clear with a few time penalties to finish up 7th. She is doing so well and looking pretty robust at this level, particularly on the XC. What a good girl, showing the world what she is made of. She looks amazing and everyone comments on the difference in her condition.

Ehren on the other hand is in disgrace! The Hickstead Masters Semi-Final was always going to be touch and go but with the rain coming sideways and Ehren in season it was all too much. Sometimes I question my sanity and this was one of those days. As always with Ehren, the good bits were lovely but there were lots of mistakes, stroppy bits, and bits where I just darent touch her. I need to learn how to ride her when she is like that, if there is a way. Until then we are trying the snaffle again, working on getting out at medium, and starting to work on our changes at home which I have to say is great fun!

You all know how much I love riding the babies and just recently I took the lovely young mare Lottie to BlueBarn BD for her first ever outing for owner Jasmine. She was not there to be competitive but just for the trip out and bless, she tried her very best coping with the whole thing really well. She was just a bit anxious and dropping the canter, but we were all really pleased. She will be very smart later on.

Lots coming up but top of the list is the arrival of a VIP schooling livery. A young lady is coming in for a couple of months to be backed. My biggest concern with this one is her owner as some are easier than others. We have the dump them and run owners, we have the four pages of A4 owners, and we have everything in between. I am very happy with these guys. Then we have my husband. Oh dear, divorce just before our 20 year anniversary.