Georgie Wood Blog 29: Do what you can, with what you﻿ have, where you are. 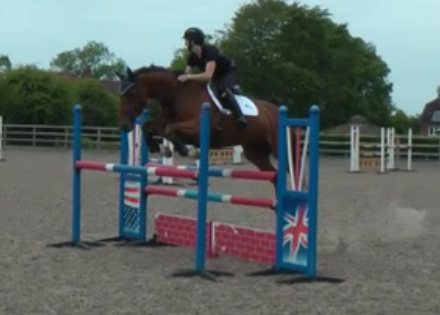 Since I last wrote it has all been rather exciting here with Coco having a fantastic first run back after injury and has come out of it in one piece and raring to go for the next one. Meanwhile Lily has been keeping her fantastic form both on the eventing circuit and out show jumping - so exciting!

On the 20th May we headed to Coombelands to see what it was like now it has the fantastic new all weather warm up. I think it may be my favourite BS venue, a lovely spacious warm-up, well built courses and fantastically organised with gaps left early on the board where numbers were put down in order to give two horse riders a chance to warm up both horses sufficiently. I had both horses in the Newcomers and Lily was up first. She jumped a fantastic round until a large rustic in the jump off which she took a distinct dislike to two strides out, a brief reminder that 1. it wasn't scary and 2. even if it was scary she was still capable of jumping it and she popped it and then flew down the last line as if to say 'well you didn't tell me I had to jump it!' cheeky mare, but she was on fab form. Coco also jumped really well and was unlucky to have the first fence in the jump off where I was a little enthusiastic at the fence before and we ended up with a rather long and flat canter.


Next up was Coco's turn to go eventing at last! It had been a long wait and I was so excited I nearly forgot my boots.. Luckily Mum remembered and after a short detour via home we were on our way. We got there and it was raining but thankfully it cleared up quickly and after giving Coco a leg stretch, Mum and I headed off to walk the course. The ground was perfect and the course was just how I expected it to be, a nice balance between big and bold and cleverly placed combinations. Soon it was dressage time and Coco was rather over excited in the warm up, but I kept riding him forwards in to the bridle and hoped he would settle. By the time we went in, he was still a little tense but tried very hard when he got in there and aside from jogging in his walk and a brief canter during one of our trot circles it was an obedient test, albeit a little tense. A score of 34 was  a fair representation of the work he had produced. The show jumping was decent with a couple of tricky lines and causing plenty of problems (which wasn't helped by the sheep being loaded into a lorry right next to the warm up, although Coco seemed to like his new fuzzy little friends!). He jumped a fantastic round, which felt easy and confident and what was even better is that he left all the poles up! He was one of 17 clears out of 34 starters in the Open Novice! We had a couple of false starts getting to the cross country, first I forgot my number, and then there was a really horrible horse fall at the first with the air ambulance coming in and all sorts. The commentators and volunteers where fantastic at keeping everyone informed and within 45 minutes of the accident occuring, the cross country was back running again! Coco was so excited and leapt out of the start box but settled quickly and gave me the most phenomenal ride, he has not forgotten a thing. I rather hacked round and Coco was very cross that we were going so slowly but a double clear and a decent dressage for his first run back was a fantastic result in my eyes.
The following weekend was Lily's turn once more and we were off to Borde Hill for another confidence giving run in the BE100open. Borde Hill is such a lovely local event and so much effort is made with the course year on year with regular changes to the course. We were early on the Sunday but had invited Carol (who helps us out with our horses 7 days a week and only ever has Christmas and Boxing day off) as we thought it would be nice for her to see us in action so to speak. Unfortunately it poured with rain for the duration but as she said, she would have been getting wet anyway! Lily did a nice enough test, not her best by any means, but it was smooth and accurate receiving a mark of 31.5 which I would say generally would be fair, however there were people with 22 dressages and she was 15th after dressage and I don't believe she should have been that far behind so many horses - but that is judging! Onto the show jumping and as always, the ring at Borde Hill was tricky and with the rain coming down, it made it even more interesting. However Lily switched on four wheel drive and popped round making it feel so easy! Bryan Lear (who we bought Lily from) was there course building and it was great that he saw her jump and was able to give me a couple of tips to carry forwards! The time cross country was really tight and I knew to be in with a chance of a placing, I would need to kick on. The ground was a little slippery but not deep or sticky so I was happy to push on as much as conditions allow. She ate up the ground and flew round clear with 11.2 time faults which was one of the faster times in the early sections. A double clear was good enough for Lily to finish in 6th place - so another fantastic result and brings her eventing tally this year to a win, a second, a 5th and a 6th out of 5 runs (if you include arena eventing and JAS she has had two wins, three seconds, a third, a 4th, a 5th and a 6th out of 10 competitions - little miss consistent!

Last week I had two days at Camp with the University Riding girls. It was brilliantly organised thanks to everyones hard work (particularly Morganne who organised the whole thing) and I had a thoroughly enjoyable time getting to ride a 13'2" which was such good fun! Mum came down and gave us a talk on what she does and how it helps the ponies which everyone found really interesting and we also got to use the little ponies to do on foot jumping and obstacle courses! It was a fantastic couple of days with a great bunch of people!

On Friday I headed down to Eaglesfield in Kent for lessons on Lily and Coco with Ernest Dillon. Lily was up first and on fantastic form (I think Ernest is secretly wishing I become a show jumper with her as she is super talented!) She popped a 1.15m track like it was nothing. Coco was a little bit enthusiastic to be out and was definitely slightly feeling the fact he had galloped round the field all morning. However, Ernest thought he was looking fantastic and once he had settled down a little bit, he popped round a 1.20m course like it was nothing.

Saturday we were meant to be taking Lily and Coco to Felbridge, however Liz and Kari (my aunt and uncle) had spare owners badges going for Epsom Derby Day as the horse they have a share in was running in the race after the Derby. I told mum she had to go, and I would go show jumping on my own, she wasn't happy with me taking two horses on my own so I just took Coco to jump the Foxhunter (and dragged the boyfriend along for company/ to video). Coco jumped really really well and made it feel easy but unfortunately had the first fence down (he wasn't expecting it to be 1.20m having not jumped that big in the ring for over a year) and the last fence down where I was thinking about turning away from the first fence in the jump off so he just touched the back rail. However 8 faults was not accurate of how he jumped. Big thank you to Rob for coming and videoing (and feeding Coco polos - the most important job!). I was also very pleased I made mum go to Epsom as Blue Surf (the horse that Liz and Kari have a share in) won the Investec Handicap at 20/1 - truly a once in a lifetime opportunity.


Finally on Sunday it was time for two more lessons with Ernest, this time at Littleton on Catherine Heilbron's 'Woody' and Luarn Wallers's 'Frank'. Woody was up first and he has come on so much since the last time I rode him a few months ago. He is much straighter and balanced and starting to take the contact forwards and down. He is a cracking little pony and popped round a course making it feel easy (especially when I had the canter powerful enough!) Next up was Frank who is the complete opposite to Woody, starting with the fact he is about 3 hands taller than little Woody! It was great to get Ernest's input on his training and we went right back to basics, spending the whole lesson in trot to get him to think for himself. He was very tense to start with but by the end he was starting to relax and jump much better as a result. I am so lucky to have such a fantastic trainer as it really made me think about how to get the best out of young horses and the importance of giving them time to grow up (especially when they are as big as Frank is). We worked on more trot jumping with Frank today and he has come on leaps and bounds as he is a very bright horse and therefore learns quickly.
I am also very lucky to be riding a lovely Irish horse for Lise Naughton whilst she is off games with an injury, he is a lovely young horse but still a little green. I took him round to Littleton on Tuesday to have a little play and he has a lovely jump on him, so I am hoping to find some local jumping to take him out to.

I can't thank Luarn, Catherine and Lise enough for trusting me to ride their horses and allowing me to get invaluable experience as a result. I am very lucky to be in the position I am in and am going to ensure I keep working hard to give all the horses I ride the best chance of reaching their potential.

This weekend we are off to Coombleands show jumping on Sunday followed by Felbridge combined training on Thursday with both horses. Then the following weekend, Lily is off to Farley for the Novice on the Saturday and then Coco is going to Nunney Intermediate on the Sunday. We are then jumping at Hickstead Thursday, Friday, Saturday before Lily will have a bit of a mini break and Coco is on the final push to Barbury 2* (eeeeeek)! We will see how Coco runs at Nunney but I may think about starting to add some of the Simple System Red Bag Grass Nuts to his feed now he is back competing as it just gives him that bit of spark in the jumping phases which I think makes a massive difference!

The next blog will be after Hickstead - so hopefully will have lots of good news to report back!!