Georgie Wood Blog 31: The season is flying by! 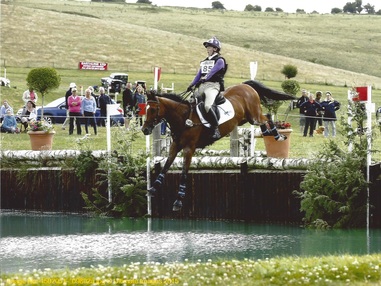 So it appears over a month has flown by and I have failed to write a blog update! Since I left off I have had great fun with Coco as well as being brought back to reality jumping young horses round the 70 and 80cm at Coombelands, with poor Lily still being on the sick list!

So I guess I will start at the beginning with Coco at Barbury. I love Barbury (along with everyone else in the eventing community) and it was lovely to know so many people who were also competing there. Jenny Wijsmuller came and helped groom/watch which was fantastic as despite living so close to each other, we never manage to actually see each other! We were parked next to the Waites who own the water treadmill (Equine Aqua Training) where Coco did a lot of his rehab and Tonya and Chloe who looked after him had come to watch so it was great that they got to see him looking so well! I can't recommend them highly enough as it is a lovely friendly but professional set up and we were so confident in leaving Coco with them. We had dressage on the Thursday afternoon, but I had run a 10k run on the Wednesday night so was a little tight but delighted with how well he went, with some fantastic moments, a couple of significant mistakes left us on a score of 55.6, which I was a little disappointed with, but the mistakes were costly. The cross country was not the most difficult track as far as Barbury goes but the skinny before the owl hole at fence 5 was worrying me as with him only having had two runs I wasnt sure how switched on he would be at that stage. We had the day off on Friday which was lovely (and lucky as I was so stiff from running on the Wednesday I could barely walk) so we had an enjoyable day watching CIC3* dressage and having another wander round the course. We were early on for our jumping on the Saturday and the course was very cleverly built with few clears. I was delighted with how Coco jumped and he finished on 8 faults which in the grand scheme of things was a good result! A quick change round and it was time for cross country, there was a bit of a wait at the start due to a fall and fence repair needed and Coco was a little excited. However he got out on course and switched on cruise control.. My only job was to steer as he was a total machine we just had one sticky moment when he over jumped into the second water and nearly came down, but luckily managed to stay on his feet and I stayed out of his way and on board. We went slowly as I wasnt sure how good his fitness was, so picked up 25.6 time faults but I was delighted with him.

I was then very lucky to go for a short holiday in Spain with my boyfriend (managed to find a suitable week where the horses were not coming first!!) we had a lovely time and it was great to have a few days r&r, especially after we have been so busy!

On the 25th of July, Mum had organised for a group of us to go up to Syon Park for the London leg of the Global Champions Tour. It is always fascinating to go and watch as they make 1.60m look so easy and it certainly gets your eye up a bit! It was also massively sociable with a lovely group of us from the yard  thanks Mum for your epic organisational skills as always!

On the Sunday was Arnies competition debut  at 9 years old and 7 years after Liz bought him he was eventually going to do something useful! Those of you who dont know Arnie, he was bought by my aunt, Liz, as a 2 year old to keep my pony company in the field. Unfortunately he then contracted Grass Sickness but very mild so managed to pull through.  However it then caused soundness issues amongst other things until we realised that the problem was that he is allergic to grass(!!!!), yes a horse that is allergic to grass. Luckily, the fantastic Simple System Feeds have a range of Lucerne based forage that we were able to use as a substitute to hay and he is able to go out in the field in a grazing muzzle so is actually very manageable. But anyway  his first party was Prelim 12 at Felbridge and I must admit he excelled himself! He was totally unfazed despite having never been in an indoor school and never seen dressage boards! Yet he took it all in his stride and was rewarded with 62.6% and 6th out of 14 which wasnt bad and just over 2% away from the 2nd! He will be advertised at the end of the summer as he is a cracking little pony and will give someone a lot of enjoyment as he is totally wasted with us!

Coco then had a few days jumping at the Royal International. On the Tuesday he jumped in the 1.10m and the Foxhunter. He jumped really well in both classes, just rolling a pole in the jump off of both but thrilled with how well he went. On the Thursday he jumped in the same classes and got a bit tense in the Foxhunter for 4 faults but then jumped a fab round in the 1.10m for a double clear (unfortunately I was just too slow for a placing!). The Saturday we were back again for the 1.20m Open which was a really decent track. I was on at 7.30am and jumped first at 8am as Mum had my Grandads 80th Birthday party to get to, followed by my cousins wedding  but she did manage it! Again, Coco jumped fantastically and rolled an unlucky pole in the jump off  but he was so neat and I had so much fun jumping all week!

On the Friday of Hickstead my trainer Ernest Dillon had asked me if I wanted to be a guinea pig for an article in Horse and Rider. The original plan was to take Lily, but unfortunately with her not sound I couldnt take her. Luckily I had several lovely offers from various people and ended up taking Lise Naughtons horse, Shadow. He was a superstar and scrubbed up very well proving the perfect candidate for showing how using poles can improve the horses way of going  so look out for us in a forthcoming Horse and Rider Magazine. See some lovely pictures that Lise taught in the album at the bottom.

Last weekend was another very exciting one  Arnie went to another party, but this time a jumping show at Coombelands. He found the big arena a little overwhelming so I decided against jumping him  but he popped a few fences in the warm up very sweetly. I also took Luarn Wallers Frank for his first ever show and he didnt disappoint. A lovely double clear in the 70cm for 2nd place in a class that caused a lot of problems. He then cruised round the 80cm with a full up 90cm jump off but had 2 down in the jump off where he was getting tired. He is seriously exciting for the future as he was so chilled for his second ever outing (even when his bridle was taken off in the warm up to give him a treat, lucky he is good!).

On the Sunday it got even more exciting as we added a new four legged member to the team in the form of a lovely 9 year old gelding by Proset called Greenlanes Prospero or Oscar to his friends. He is owned by Peter Greenaway of Greenlanes Stud and I have got him to produce for eventing with a view to sell! He has settled in quickly and is a pleasure to have around. A weeks bootcamp and he has had a few little jumps and is learning where his feet are too  which is always helpful! See the pictures below!

However there has been a bit of disappointment with Lily not being sound, so we got her referred to Liphook for lameness investigations last week. After a lot of x-rays and MRIs she was diagnosed with a minor strain to the lateral collateral ligament in the foot. Normally this sort of injury is difficult to deal with as they are not easy to heal, however hers is only a slight thickening so the vets are hopeful that it should heal well. So she will have a bit of time off before beginning rehab work. No more eventing 2015 for her but what a season she has had  I love her so much and my main goal is to make her comfortable again and we will go from there. She has had two wins, a second, two 5ths and a 6th and has jumped 6/7 double clears!

So whilst she is on limited turn out and in a lot, her feed and hay is being supplemented by LucieBrix to keep her occupied. Meanwhile, with Coco getting fitter and working harder, he is now on Red Grass Nuts as well as Greengold, Topnosh and Lucie Pellets to give him energy and maintain condition. Both horses are also fed Linseed on top of their balancers in order to give them that bit of support.

Coco had an outing to Felbridge Intermediate Combined Training on Wednesday where he performed a beautiful test for 31.6, I am trying to create a bit more energy so that we get the wow factor rather than keeping it safe and steady to see if we can start collecting some higher marks. He then jumped a great round over a decent track for 4 faults. He won his class (although he was the only one in it) however if our results had been combined with the Novice (who had the same judge), he would have won by miles as the best dressage score was 37 and no one jumped clear!

Yesterday we headed back to Felbridge for the Foxhunter. My Grandad is currently over from Australia and has always supported me from across the world, yesterday he saw me compete for the first time and although we had two poles down  Coco jumped brilliantly and pinged the 1.30m fences in the jump off like they were nothing! Lots of love for my super special boy!

So as I said - the season is flying past and Coco is at Bicton next weekend and then a couple of days at Hickstead show jumping on the 3rd and 4th of September, followed by the unafilliated dressage championships at both Novice and Elementary on the 5th of September at Hickstead!

So that is my essay done for now.. And I promise next time it won't be quite so long!!!