Georgie Wood Blog 32: We finally got a run! 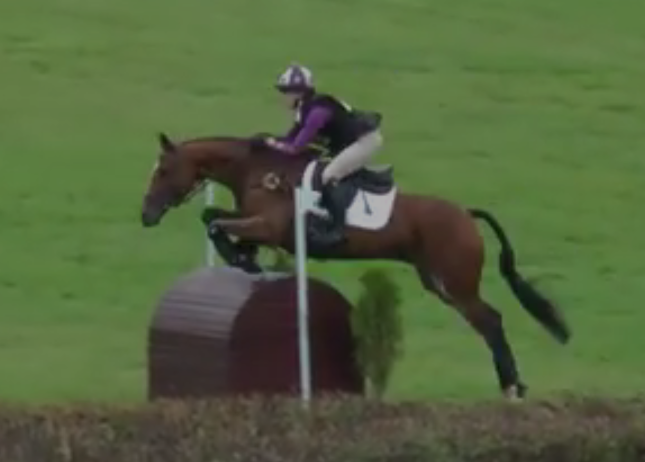 When I left off, we were supposed to be heading to Bicton with Coco for the CIC2*. We left at 6am on the Saturday morning to avoid the summer holiday traffic that heads along the A303 and past stonehenge. Made good time and arrived to give Coco a hand graze and some chill out time in his stable before plaiting up and getting ready for our 4.30pm test. At about 3.45 the heavens opened alongside a huge thunderstorm, which thankfully stopped just before I was due to get on, however it was still rather damp. Coco warmed up brilliantly but got quite tense in the atmosphere of the main arena as they were introducing each competitor over the tannoy.. A great experience but Coco found it very exciting, especially with the cross country running along the top of the bank outside the arena. However, he produced some lovely work for a score of 51.9, so getting close to the 40s now. It was a shame we had a couple of big mistakes as it would have been easily in the 40s without them! In the evening we went to The Eventing Family party. It was an incredible evening and clear that so much hard work and generosity had gone in to the evening. A highly entertaining slave auction and brilliant band made for a thoroughly enjoyable time. Unfortunately the rain had not stopped, and if anything was getting heavier. When we went to bed about midnight, the whole lorry park was starting to flood and we knew that we were unlikely to run. Woke up Sunday morning and it was still raining. They had moved the show jumping onto the surface and removed a few of the cross country fences. We decided against jumping him as we had nothing to gain from it, and all at Bicton had done an amazing job of keeping the show on the road, but with him only having run three times on perfect going since he has been back, it wasn't worth the risk. It was a lovely event and we will definitely be back!
Next up was Oscars first proper outing with us. We went to Felbridge for a spot of clear round jumping, and knowing that Felbridge have lots of bright arena decorations, we made sure we had used blue blocks and artificial flowers to replicate it before we went! In the 70cm he found it all a bit small and his legs got in a bit of a pickle a couple of times for 3 down. However, I was thrilled with his attitude as he kept going forwards and wasn't at all spooky which I thought he might be. When the fences went up to 80cm I think he decided that they were worth jumping and jumped a beautiful clear round! He was really thinking and tried so hard.
After not getting to run at Bicton, we put a late entry in to Wellington on the Monday for the Intermediate to try and get a run! However it continued to rain and the Monday morning, despite it still raining and being late to go, I made mum get up and we headed off to Wellington. Each junction of the motorway we passed, it got wetter, and mum was growing increasingly tempted to turn round and go home. I persuaded her not to, however on the premise that if they were towing people in, we would turn round and go home. As we turned and starting driving in, I could see people being towed, so mum stopped and I ran up to the secretaries to withdraw, buying us a bacon roll and a hot chocolate as a consolation prize. Meanwhile, mum was trying to find something to do instead. We decided to reroute to Tweseldown to give him a bit of fitness work round the racecourse and pop a few fences as we weren't far away. A quick phone call and we were on our way. So we cross country schooled in our white numnah, cream jodhs and Coco was plaited - as I refused to let them go to waste!! However, he was very happy and it was lovely to have a bit of a blast on fantastic going. Anyone who hasn't been to Tweseldown since the new owners have taken over - it is well worth the visit. Loads of fantastic new fences going in and brilliantly friendly too!
Our next outing was to Hickstead showjumping with Coco for the All England Jumping Champs. The Thursday we had entered a 1.10m and a 1.20m, mum wasn't around but Nathalie very kindly agreed to come and keep me company and lend a hand with warm up fences etc. It was lovely that Liz managed to get down to watch both days as well. He was absolutely flying on the Thursday and jumped beautifully in both classes. He was very unlucky to just roll one pole in the jump off of both classes, if he had been clear he would have been very well placed. The Friday, having jumped two long course on the Thursday, he wasn't quite as bouncy as the day before, and I slightly underpowered him in the 1.20m for 8 faults in the first phase, however he actually jumped well. We were supposed to be jumping the 1.30m but decided that was silly when he was a little tired, so we swapped to the 1.20m in a different ring. I rode him with a bit more power and he flew round, but unfortunately knocked the planks down (which were the last fence of the first phase). Still really pleased as every time I go to Hickstead I learn even more! Some lovely pictures from the two days are below.

Next it was Oscars turn to go cross country schooling again. This time we hacked round the corner to Littleton. Oscar loves ditches and steps and jumped the jumps with a ditch underneath better than a straightforwards roll top!! However I was delighted as he grew in confidence the more he did and walked straight into the water after a tiny hesitation - I think he is beginning to think we are less weird and getting used to the whole 'eventing' thing!!
We had a trip up to Blair to watch the Europeans last weekend and it was fantastic. I would love to go and compete there in the future as it was a fantastic event. Ian Stark had built a brilliantly clever course which rode really well, it was a shame about the rain, but it did add another dimension. Michael Jung is an absolute machine and the Germans seem fairly uncatchable at the moment, with 5/6 of their representatives jumping incredible double clears.. we have all got a bit of catching up to do I feel.
Finally, this weekend, Coco got his chance to go eventing and complete all three phases and he did not disappoint! We headed to Pontispool for the Intermediate yesterday and he was so pleased to be back out. We drove down on Sunday lunchtime and stabled overnight as I had asked for early times and we had a 7.48 dressage. But that quite suits him as he has time to settle in. He performed a really, lovely relaxed test for a well deserved 30.7 - I know need to add the wow factor without tension creeping in, but we are getting there! He was 11th out of 35 after the dressage and he followed it up with an awesome double clear. The showjumping caused its fair share of trouble, but our practice at Hickstead paid off and he cruised round. The cross country was tough, with a bridge over the ditch at 3, and a big drop in to water at fence 5. There were very few let up fences and lots of questions and having not run for nearly 3 months I wasn't sure how switched on he would be, so my plan was to go out and attack it. Well I don't know why I doubted him, I have never ridden a horse which looks for the flags the way he does and regardless of what I do, as long as I keep steering in the direction of the fence, he will just keep jumping. He is a truly special horse and as long as I can keep him in one piece through the winter, I can't wait to get him out and have a crack at an Advanced and maybe even a 3* next year (I musn't get ahead of myself though!). We finished with 21.2 time as I didn't push for the clock due to not having run for a while. However, really pleased with how he went.

We are supposed to be running at South of England Intermediate next weekend, but it was more of a back up if we weren't able to run yesterday, so I will see how he is this week and what the weather is like before we make a decision. Then Oscar will have his time to shine, we are heading to Felbridge BS on the 3rd of October followed by Munstead for the hunter trial on the 4th of October in preparation for his BE debut at Littleton Manor on the 11th of October. I can't wait to get him out and about as he has come on so much in the short space of time I have had him!