Georgie Wood Blog 38: Back in Action! 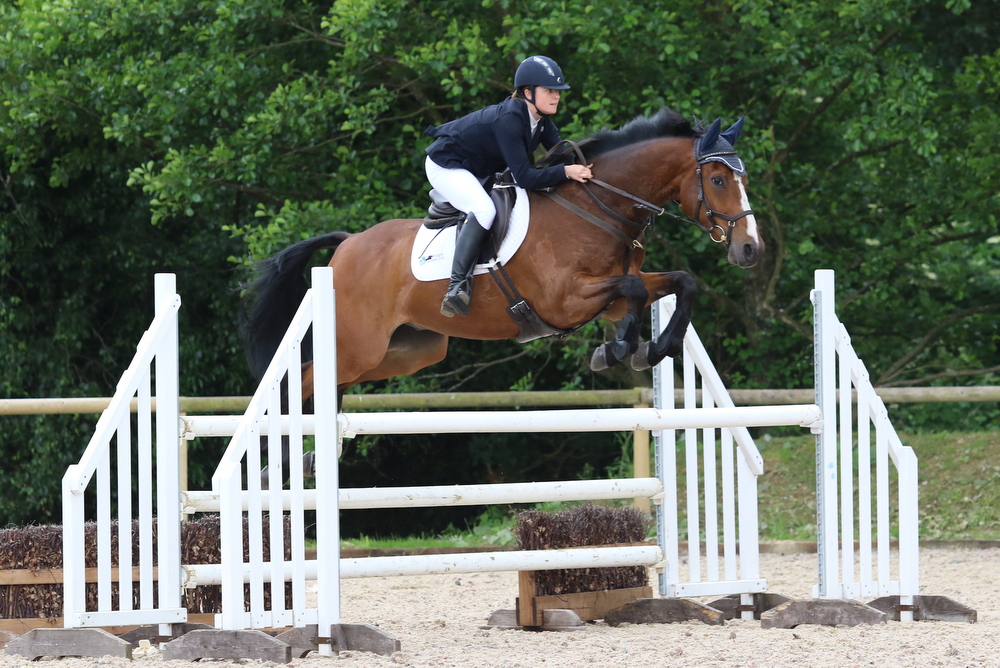 So a month on from finishing my three years at university, I have found out that I will be graduating with a 2:1 degree in BSc Geography from Royal Holloway University of London. To have been able to continue to ride and compete as much as I have alongside a degree has not been easy but it has been made possible by the awesome support team at home (aka Mum) and everyone at Uni including my lecturers and tutors who have been so understanding of my commitments. Im also grateful for the University's sports bursary programme which has provided an invaluable back- up and opportunities which never would have occurred otherwise. Also my friends from uni who have embraced my madness, collected lecture notes from lectures I have missed and helped me with my work - this grade is a reflection of everything, not just what I have put in.

So back to the horses and safe to say my enforced rest has done my horses the world of good! Jenny took over competing Oscar whilst I was off and jumped some lovely rounds out show jumping. She gave him a lovely ride every time and he learnt a lot as a result.

Coco spent two weeks down in Sussex at Equine Aqua Training which has a water treadmill and I have no doubt this contributed to his recovery and to come out of our fall as well as he has. Just 3 weeks post- break I was given the all clear by the doctor to get back on (provided I didn't fall off). I was back riding the next day and back in the gym later that week. My aim was to be back eventing for Berkshire College of Agriculture on the 12th June so that gave me 2.5 weeks to get going. During the weekend of the 4th/5th June, I took Coco and Oscar show jumping. I immediately got into my stride with Coco, jumping a fantastic double clear in the Newcomers for 2nd and then an unlucky pole in the jump off of the fox. Oscar jumped a lovely round in both the British Novice and Discovery having a silly pole early on in both rounds but jumping the bigger jump off fences much better. We then headed off cross country schooling later that week with both bay boys. Oscar was like an old pro, popping round all the fences he had never seen at Parwood including jumping off the steps into water. Coco is like putting a comfy pair of slippers on and if he remembers the fall it hasn't bothered him, he flew round feeling confident and happy which was such a relief!

Having been signed off by the Doctor as fit to compete with BE, it was all systems go for BCA with Oscar who was just entered for the 90 as the last time he evented was March. Mum was now in Australia so it was time for me to go at it alone, luckily a good friend of mine was able to come for moral support. Oscar was a superstar, a good dressage for 26.3 followed by a faultless double clear and inside the time to WIN his section by a huge 8 penalties. Safe to say we nailed the comeback and it was quite emotional! I can't thank his owner, Peter Greenaway, enough for allowing me to produce his lovely horse and to everyone who has put the work into him to make him the horse he is, who tries his best and always wants to please.

However, there was no time to rest as the following weekend we were stepping up to BE100 again at Rackham, but not before we went to Felbridge for some show jumping practice. Oscar jumped two lovely rounds, including making the step up to Newcomers easily, the bigger the fences get the better he jumps! Coco also jumped well in the foxhunter, just rolling the last fence in the jump off which was a shame.

Rackham was a big step up in the jumping phases for an inexperienced horse. I realised that poor Oscar had only ever jumped on grass twice before Rackham and the SJ is renowned for being tough. He ended up with 3 down which is not a true reflection of his talent or desire to leave the fences up. I was a bit gutted as I felt I had let him down and he had done an awesome dressage for 24.5. However, putting that behind us and knowing the XC time was tight, I headed out of the start box meaning business. Oscar responded and stormed round without a moments hesitation. He loves his cross country, he jumps out the start box with his ears pricked and never looks back! Unfortunately no videos as I was there on my own so no one to film it!

This week was another busy one with Coco entered at Hickstead jumping on Wednesday and Thursday before Farley on Saturday. He jumped amazingly round a tough Foxhunter on Wednesday for a double clear and finished 21st out of 130 horses which wasn't bad going. Unfortunately when we headed back on Thursday, heavy overnight rain had made the ground quite wet and Coco is too special to risk when he doesn't need to be jumped so I took him home again. Then Farley had to cancel their event as the river burst its banks and flooded the cross country. I am gutted for them as they had invested so much in the track and the venue, I was so excited about heading back and you wouldn't think flooding would be an issue at the end of June! Poor Coco hasn't had a run since his fall and he is entered at Barbury 2* in two weeks time. So it will be a late entry at Great Witchingham next weekend and he and Oscar are heading to Norfolk for the Intermediate and BE100 respectively!

Oscar is now out a lot more, so he has come off the PuraBeet and is just having GreenGold and Total Eclipse whilst being target fed Red Grass Pellets for energy leading up to the events, they are great as they just give him a bit of spark but without making him sharp or naughty.

Coco is still having PuraBeet and TopNosh as well as GreenGold to maintain condition whilst he is in a lot of work and cantering regularly. He also has Red Grass Pellets in the lead up to a competition. They are looking great, their coats are shiny and they are certainly feeling very well in themselves!

Hopefully Coco will have got to go eventing in my next blog - but with this mad English summer, anything could happen!