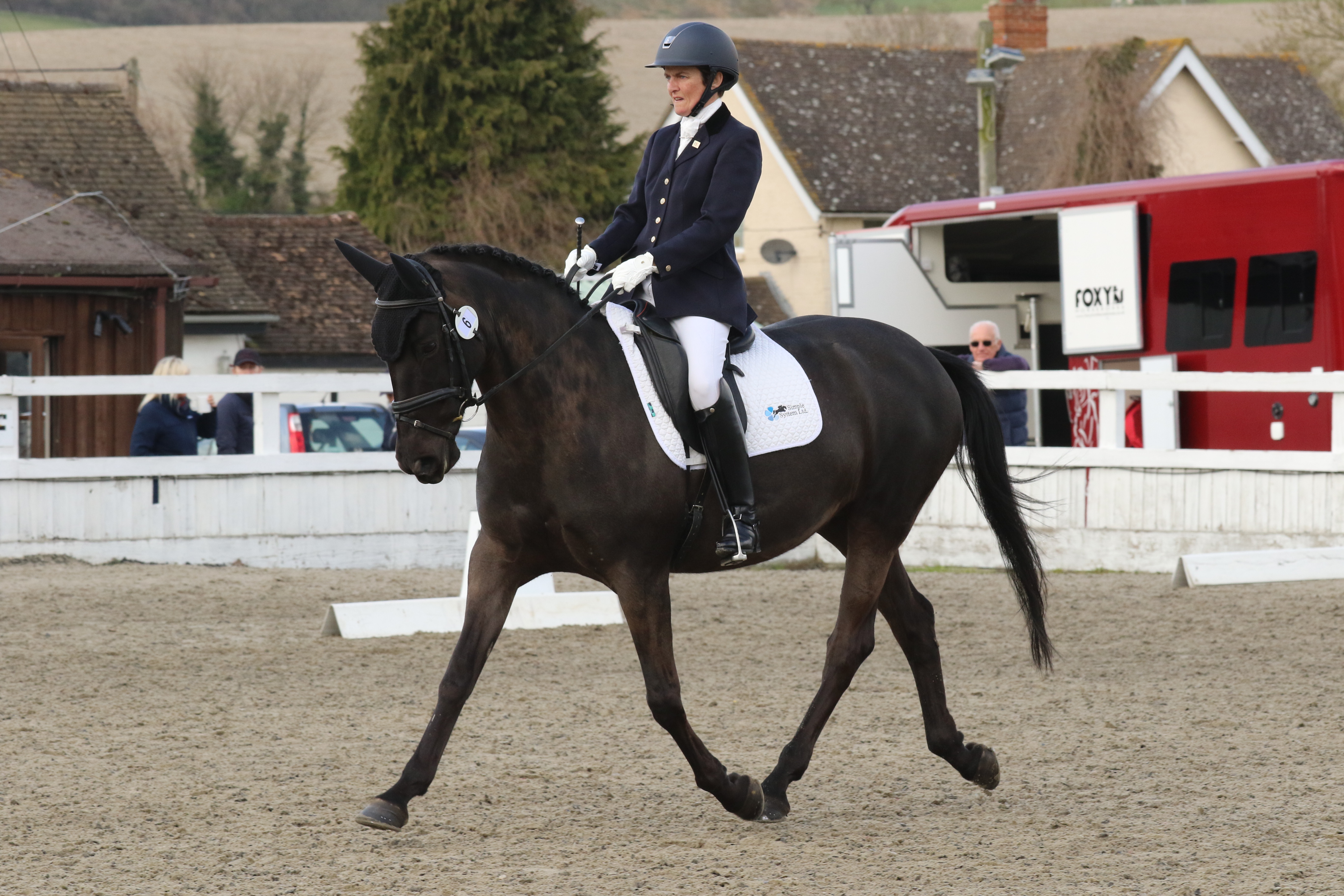 Millie had been very busy starting her event season. Shes been to Poplar and Munstead for the BE90s, jumping super slow double clears in both and picking up a 7th at Munstead. We then decided that it was time to try her first BE100 at Horseheath and she didnt disappoint really trying her best with a pole SJ and clear XC. Millie can be quite tricky to train at home but she jumped a really measured XC round over what was a fairly technical and educational course. Absolutely delighted, and we were really looking forward to seeing what she made of Chilham the following weekend. Unfortunately that wasnt to be.more on that later!

The Bomber completed her BD Area Festival and Regional qualification at Cobham in the Elementaries with around 69% in both tests and had a practise run for the Festivals at Pachesham with 67% and 68%. Weve had some great flatwork lessons with Char working on her suppleness and getting her to carry herself; a bit of a working progress! She is doing a little of everything in order to see how sound she is, and keep it varied. She wouldnt want to be limited to trotting pretty shapes. With that in mind weve been XC schooling, did the Munstead 80cm hunter trial, and have also done lots of clear round SJ practise at both Crockstead and Felbridge all with the aim of having a go at a BE80.

After the winter SJ clinics and pre-season XC schools its always brilliant to see everyone out eventing once the season gets going. The dressage divas have been out in force too and I headed up to Hartpury to support Heather and Okie at the BD Winter National Championships. I couldnt have been prouder of Okie Bad Boy. He tried his very best and probably performed one of his best tests to date. What an amazing experience for them both.

Young Rodders has a mixed school report, as seems to be the norm! Hed been ever so good with a trip out to East Bysshe to see the SJ arena, and XC schooling for the first time in a group at Comphurst. He really looks like he might have a proper pop in him. However, moving him onto summer paddocks saw him turn into a delinquent to turn out, being rather over-keen to get to the lovely grass. Wed just got to grips with this when he had what I can only refer to as a you plonker moment. It has been suggested that naming him Rodney has been a bit of a self-fulfilling prophecy! Martin had stopped to check his girth and adjust his stirrups at the edge of the arena. Rodders didnt want to stand still and struck out in temper with a front leg. Being a dufus, he put his giant soup bowl sized hoof through the fence. Uh-oh, panic stations, two metres of broken timber pulled underneath him, an unconscious Martin with a fractured rib and a broken collar bone. Stupid big idiotic creature. If Martin looks like he has put on weight next time you see him it is because I have lined all his clothes in bubble-wrap.

So with Martin off games, it was time for this rather rusty jockey to keep her promise to the Bomber and head off to Borde Hill for the BE80. I hadnt evented for eight years and it was a rather gobsmacking twenty years since I last competed at Borde Hill so its fair to suggest I was a little apprehensive! The dressage was OK, a little unbalanced on the grass slope, but a tidy test. I found myself in the SJ warm-up (which is fairly steep) wondering when I last cantered downhill and decided since it was very much more than five years I had better focus on something else! Despite the cheeky pony halting on route to fence two we show-jumped clear, and then jumped a rather slow but great fun clear XC. It was her turn to help me out when I gave a masterclass in how not to come downhill to fence 6. Must keep thinking forwards next time!

Coming up the Beautiful One heads off to the Groomsbridge Stud maternity ward, gulp. BomBoms has the BD Area Festival at Pachesham, there are Stratford Hills and Brightling Park BE events, and our two summer camps at Lodge Farm and Comphurst. Young Rodders has thrown a small splint so he is having a quiet period of filling out and contemplating his misdemeanours!

Janine and the Bomber competing at Borde Hill Horse Trials BE80

Martin demonstrating the importance of a good cross country seat

Martin and Millie stepping up to BE100 at Horseheath

The Beautiful One as you've never seen her before